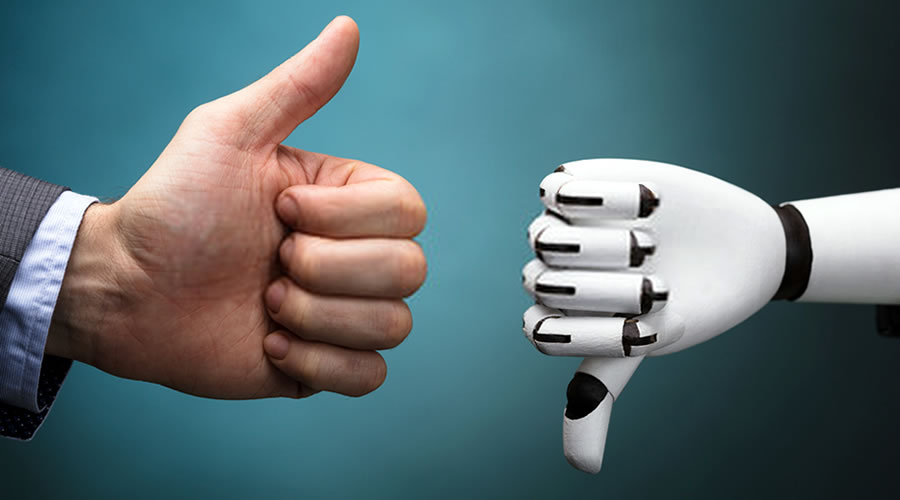 Artificial Intelligence hasn’t taken over the world yet, but they might do that in the future, as you have seen in many popular movies like iRobot in which an AI named VIKI decides to take control over humanity for their own safety or from Avengers: Age of Ultron in which the Ultron wants to bring peace in the world by destroying the world.

Well, from these movies, we can understand that an AI doesn’t understand the true meaning of safety or peace, so if an AI is not coded properly or a certain wrong command is given or if it falls in the hands of some bad people then AI can be dangerous.

Any powerful technology can be misused.

There are so many AI applications that build our everyday lives a lot of easier and productive. The rate at which new innovations are coming up, everything can be done with just one command. The question is, should we be more worried about the world we’re creating? Is there a need to be scared of this Intelligence or not?

As our AI capabilities and possibilities expand, we will also see it being used for dangerous or malicious purposes. Since AI technology is advancing so very quickly, we need to start debate the best ways for the AI to be developed positively while minimizing its destructive potential.

Researchers say that an AI is unlikely to exhibit human emotions like love or hate and that there is no reason to expect AI to become intentionally kind or unkind.

An AI will be extremely good at achieving its goals, and if those goals aren’t as same as ours, we have a problem. For a self-improving and learning AI to be completely safe, it would not only need to be “bug-free”.

How AI Can Be Dangerous

People could move from physical and repetitive jobs to jobs that actually require tactical thinking. And people could also get more time to spend with their loved ones with less physically demanding jobs.

But this is more likely to happen to people who are educated well and fall to the more luxurious side. This might increase the gap between the rich and poor even more since the computer doesn’t need any salary, the owners of AI-driven companies will make all the profits and get richer while the humans who were replaced will get even poorer.

Social media, with the help of its autonomous-powered algorithms, which are very useful at target marketing ie, with the help of personal info, the companies can know what type of product is to be suggested to the users through ads. This algorithm helps in knowing who we are, what we like. Almost everyone is on Facebook, but no one was aware that Facebook was using the user’s information.

This is a significant drawback of AI. It can target people and spread whatever information they like, in whatever format they want and scan out the most convincing info.

While Artificial Intelligence can contribute a lot to the world, unfortunately, it can also help terrorists to perform terror attacks.
Terrorist agencies could use automatic vehicles to deliver and explode bombs or create guns that can track movement and fire or shoot homing rockets without any human help.

Privacy is a fundamental right that everyone deserves. An individual’s personal life can be tracked easily. A person’s every move can be detected, what he does in his daily routine can be known. There are cameras everywhere, with facial recognition algorithms.

Today, it is possible to track you easily as you go about your day. The data gathering abilities of AI also mean that a log of your daily activities can be created by accessing your data from various social networking websites.

5. Misalignment between Goals and Machines

Humans value AI-powered machines because of their efficiency and effectiveness since there is less man force needed. But, if goals that are set are not clear, then it could be dangerous.

Let’s say, if a machine isn’t armed with the same goals that one has, then there might be a disparity.

For example —– Sorry for retaking it from Avengers, in which Ultron is made to bring peace in the world, but the Ultron thinks that peace can be only achieved by killing all the human. It doesn’t know the value of human life. Literally, there will be peace, but there will be no more humans left to see that.

Neural networks in AI are used by criminals to detect and identify passwords. Passwords like – “password” can be guessed easily by machines. Criminals manage to crack a part of the passwords with the help of neural networks. Today, it is easily possible for a machine to analyze some numbers and predict unknown passwords.

With a powerful PC combined with an AI can try multiple combinations of password using numbers and alphabets without any limit.

AI is programmed and is an automated system, which means it’s depended on no one. It is even possible that the nuclear arms race can be replaced with a global autonomous weapons race.

Autonomous weapons are the military’s automated system that can search their targets and aim independently according to pre-programmed instructions. And almost all technically advanced countries in the world are developing these systems. But there are many risks in having these weapons. What if they kill innocent people or what if they cannot distinguish between their targets and innocent people and kill them by mistake. It is possible that future wars would not be entirely fought by humans; it will be the age of bots — “killer bots.”

Machines collect, track, and analyze so much about a person, and they can track you as an individual and possess all your information. It’s also possible to use the information against that person.

Any powerful technology can be misused. What do you think? Can AI be dangerous?