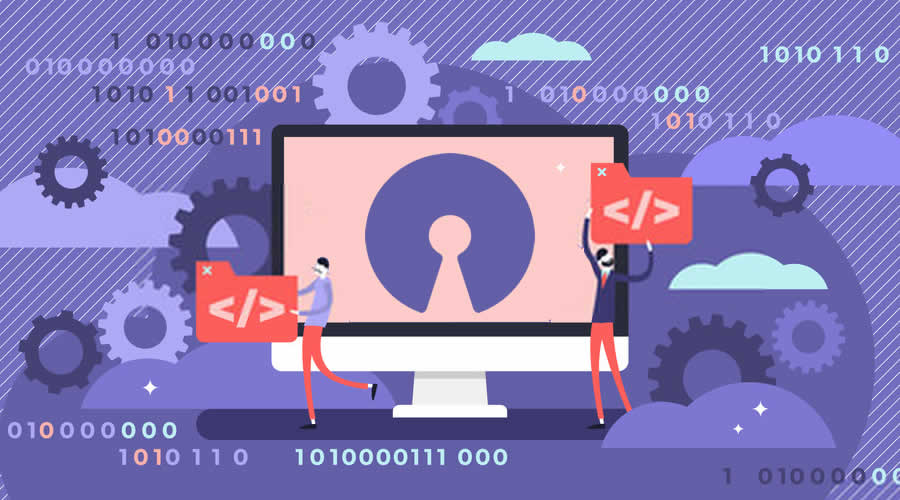 Your choice of programming language determines what tools are at your disposal and to some extent, it dictates what’s in your toolkit. Here’s a short list of some common open-source coding tools for developers with a brief introduction to each.

Open-source tools are tools that perform a specific task, in which the source code is openly published for further use and modification from its original form, free of charge. In other words, open-source tools are used to share the code written by one programmer, so that others can use it and do some changes if needed.

Open-source tools cost nothing, and if they’re properly maintained by the open-source community, their quality is equal to that of their commercial competitors.

Git is a free and open-source distributed version control system designed to handle everything from small to very large projects, with speed and efficiency. With the rise of GitHub, Git has become the most popular version control system among software developers. Its unique branching model allows users to create multiple local branches that are completely independent. Users can pick and choose which branches to push to a remote repository, and can easily exchange or delete certain releases.

Git is used by Google, Facebook, Twitter, Microsoft, LinkedIn, and Netflix. Git is easy to learn and lightning-fast performance.

Eclipse IDE is a software well-known and popular group of development tools that provides a development environment to run Java Application and web-based applications. It is the most commonly used Java IDE. Eclipse provides various IDEs also to run C++ and PHP programs.

Eclipse is a platform that has been designed for building integrated web and application development tools. The compiler offers helpful hints and tips to probable syntax problems as you type a line of code, and it can often correct errors which happens due to missing header files. The interactive source-level debugger is informative.

The eclipse can also work with typesetting languages such as LaTeX, and networking applications like telnet and database management systems. The Eclipse Foundation, which oversees the development of the IDE, supports more than 250 open-source projects, most of them related to development tools.

Cordova is a mobile application development framework. It allows mobile developers to write for iOS, Android, Windows and other platforms using web development technologies like HTML5, CSS3, and JavaScript. The applications created are neither entirely mobile-based nor web-based. With Cordova’s open-source users can use their code across various platforms and can access the framework in offline scenarios. Cordova is sponsored by the Apache Foundation.

ASP stands for Active Server Pages. ASP.NET is one of the best open-source tools for developers created by Microsoft as a development framework for building dynamic web pages, web applications, and web services. ASP.net allows you to use a full-featured programming language such as C# or VB.NET to build Web applications easily.

Bootstrap is a free and open-source front-end component library used for designing websites and web applications. It offers design templates and themes for creating user interfaces with CSS, HTML, and JavaScript, which comes in handy. It contains optional JavaScript-based design templates for typography, forms, buttons, navigation, and other interface components.

Bootstrap is designed for simplifying the development of web pages, and its primary purpose is to affect the color, size, font, and layout of web projects. It was developed by Twitter and the first version was released in 2011. Bootstrap describes itself as “the world’s most popular front-end component library.” The library is free and open-source, but some premium themes require a fee.

NetBeans is a free-to-use open-source developer tool that is an official integrated development environment for Java 8. It allows the developer to create desktop, mobile, and web applications with Java, JavaScript, HTML5, PHP, C/C++, and more. It also supports HTML5, JavaScript, Java, C/C++, and more. It has fast code editing, code generators, code tips, efficient project management, a GUI builder, debugging tools. With NetBeans open-source nature, users can file issues and bug reports, and can also submit version pull requests. It has won several awards and has a large library of plug-ins. The Apache Software Foundation manages it.

Vim is a highly experienced level text editor with many die-hard fans and a long-time rivalry with Emacs. It helps in creating and changing any kind of text very efficiently. The Vim comes as ‘vi’ in Unix and macOS. It supports hundreds of programming languages and has a large ecosystem of plug-ins. Vim is very stable and is continuously being developed to become even better. It is charity-based, so those who use it are asked to donate to an organization that helps needy children in Uganda.

Emacs have been in use since the 1970s for writing code. It has been a long-time rival to Vim. The Emacs text editor is also one of the favourite among Linux users, and it has Windows and macOS versions as well. Emacs is a family of text editors that are characterized by its extensibility. Emacs has content-aware editing modes with syntax coloring, built-in documentation and tutorials, full Unicode support and tools for project planning, debugging and more.

Ruby on Rails is an open-source server-side web application framework for developers. Rails is a model view controller framework, providing default structures for a database, web service and for web pages. It supports the use of web standards such as JSON or XML for data transfer, and HTML, CSS, and JavaScript for display and user interfacing. It helps in seamless database table creations, migrations, and scaffolding of views sets it apart from other web app development technology. Its users include some of the most popular services such as GitHub, Airbnb, and Hulu, etc.

Brackets is a free and open-source text editor that has focused visual tools and preprocessor support. Brackets is a source code editor with a main focus on web development. Brackets is focused on making it easy to design and create projects in the browser and is made for web designers. Users can work in JavaScript, HTML, and CSS. It has versions for macOS, Windows, and Linux. It is created by Adobe Systems and is currently maintained on GitHub by Adobe and other open-source developers. It is written in JavaScript, HTML, and CSS.

Hope this article was helpful.