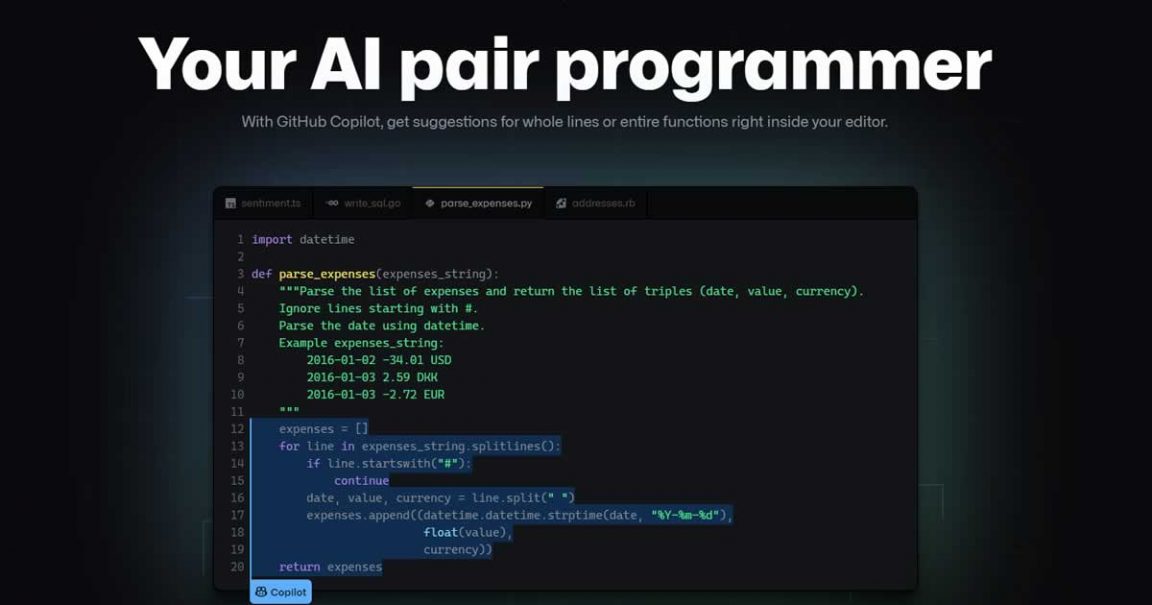 GitHub has partnered with OpenAI to create this system that uses the OpenAI Codex machine learning platform to simplify the programming process and make it more accessible to learning.

GitHub Copilot is in charge of reviewing the code with you and is capable of suggesting code and sometimes full functions — all as the developer works within the code editor. GitHub Copilot wants to make writing code very easy.

GitHub Copilot does not seek to replace developers but rather to focus as a tool to improve productivity and facilitate the learning of various in-demand programming languages. It precisely supports a wide set of frameworks and languages. Currently, the programming languages ​​with which it works best are Python, JavaScript, TypeScript, Ruby, and Go and is expected to evolve into more languages ​​over time.

How does GitHub Copilot work?

GitHub Copilot differs from traditional code completion systems by the ability to form fairly complex code blocks, down to out-of-the-box functions synthesized with today’s context in mind. Since Copilot is an AI function that has learned through several million lines of code and recognizes what it is planning based on the definition of a function, etc.

The system analyzes the context of the editor and transforms comments into code. This can be very useful for quickly producing repeating code patterns.

In addition, GitHub Copilot suggests tests that match the code you are writing and makes it easy to develop software in any of the supported programming languages. The changes are not applied immediately, the user can choose which suggestion to accept or reject. You can also manually edit the suggested code.

In short, GitHub Copilot adapts to the way a programmer writes the code and takes into account the APIs and frameworks used in the program.

GitHub Copilot integrates directly with Visual Studio Code. It can be installed as an extension or used directly in the cloud through GitHub Codespaces.

Of course, it is currently available as a Technical Preview. A commercial version of GitHub Copilot is expected to be released later, although there is currently no set date.