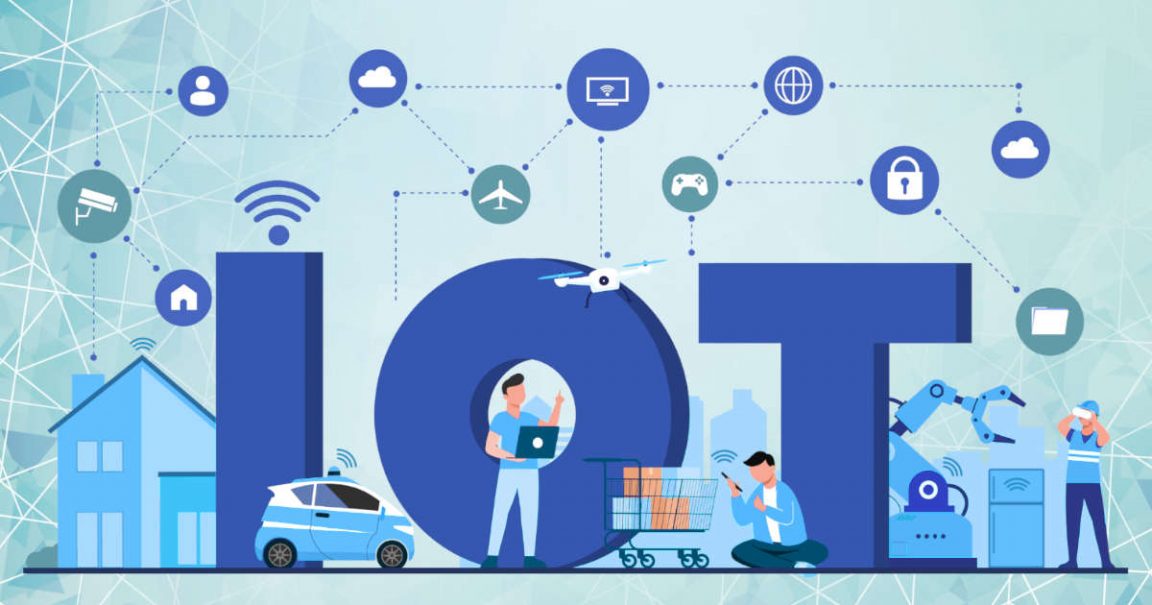 Today, the advancement of digital technologies has influenced every aspect of our life. The global penetration of mobile communications and the Internet has made it possible for anything to be online and “communicate” with other things. This is how the concept of the Internet of Things (IoT) was born — devices, objects and services united in a global network with intelligent capabilities.

IoT is now used in various fields and has become firmly established in the world. Even if you have a vague understanding of IoT, many people may find it difficult to explain when asked, “What is IoT?” Therefore, this time, we will thoroughly explain what IoT is.

What is IoT (Internet of Things)?

IoT (Internet of Things) refers to technology that connects “things” such as automobiles and home appliances to the Internet and enables remote operation, monitoring, and control. For example, by installing a wireless communication device in an electric pot, it is now possible family members to know about the usage of the pot and control it from anywhere.

The concept of the IoT was formulated in 1999 as an understanding of the prospects for the widespread use of radio frequency identification tools for the interaction of physical objects with each other and with the external environment.

Thanks to the ubiquity of wireless networks and the advent of cloud computing, since the 2010s, this concept has been actively developing. Now along with big data (Big Data), cloud computing and 5th generation mobile networks (5G), IoT is going to be one of the most promising areas for development in the world of information and telecommunication technologies in the coming years.

Difference between M2M and IoT

By the way, there is also M2M (Machine to Machine) Communication that is easily confused with IoT. M2M refers to the connection of machines with a network without human intervention and is good at collecting data and liberalizing control of machines.

The concepts of M2M and IoT have different meanings. Most experts believe that the Internet of Things is a broader concept that will evolve from M2M and other technologies.

Simply put, M2M is a situation where “machines” use network resources to communicate with the infrastructure of a remote application for the purpose of controlling and managing either the “machine” itself or the environment. The potential interconnection of smart objects and how we interact with the environment is what constitutes the IoT, where the physical world will merge with the digital world.

So M2M is a technology that can be said to be the predecessor of IoT, and it can be said that M2M’s achievement is that it has become possible to entrust machines with dangerous and complicated work for humans.

What can IoT do?

Earlier, I mentioned that IoT is a technology that can be operated, monitored, and controlled from a remote location. Specifically, the following four things have become possible. By combining multiple of these four functions, it is expected to be able to do even more things in the future.

The most familiar thing about IoT in our daily lives is the ability to remotely control things from a distance. For example, this includes the ability to turn on the air conditioner, vacuum cleaner, and rice cooker at home using a smartphone app, even if you are away from home. This “remote control” technology is attracting attention as a function that makes our lives more convenient and richer.

2. Know the state of things

One of the use is to monitor objects in remote locations via the Internet. This gives us information to guide our next action. For example, in the medical field, it is possible to issue an alert when a patient’s heartbeat or breathing is abnormal or to collect data for marketing 24 hours a day.

By using IoT technology to detect the movement of objects, it is possible to quickly grasp the current status, abnormalities, and changes in objects, and take the next action. For example, services that enable real-time monitoring of train and bus operation status and congestion.

By combining the aforementioned M2M and IoT, it is possible to combine the functions explained so far. It is said that this trend will further accelerate with the next-generation communication technology “5G”. One of the popular interests is the automated driving system. It is also expected to mitigate traffic congestion by receiving information on traffic regulations, traffic jams, traffic signal data, etc., — setting optimal routes and adjusting speeds.

How do IoT works?

Typically, an IoT system consists of devices with sensors and a cloud platform to which they are connected via WiFi, Bluetooth, LAN. Devices collect data and send it to the cloud, and the application processes it. IoT applications allow you to visualize data, monitor metrics, and manage connected devices.

The possibilities of using the IoT are extremely wide. The ideology of the IoT is aimed at increasing the efficiency of the economy by automating processes in various fields of activity and excluding people from them.

Sensors installed in wearable devices such as smartwatches make it possible to digitize and store biological information such as the patient’s pulse and blood pressure. It is also expected that doctors and nurses will be able to grasp the patient’s condition in real-time, even from a remote location, and administer medications as needed. AppleWatch is a good example.

Wouldn’t it be great if you could turn on the air conditioning before you get home or turn off the lights after you’ve left the house? Or unlock the door for your friend for temporary access even when you’re not home. Don’t be surprised as the Internet of Things takes shape — companies are developing products to make your life easier and more convenient.

A connected car is one that uses onboard sensors and internet connectivity to fully optimize its own operation, maintenance, and passenger comfort. The majority of the major automakers, as well as some daring new companies, are developing solutions for connected cars — Tesla, BMW, Apple, and Google are all working to usher in the next automotive revolution.

Through the implementation of IoT sensors, a significant amount of data can be obtained on the state and stages of the soil. For example, soil moisture, acidity level, the presence of certain nutrients, temperature, and many other chemical characteristics assist farmers in controlling irrigation, making water use more efficient, specifying the best times to start planting and even detecting the presence of diseases in plants.

With the advent of smart houses and smart cities, I have a feeling that IoT will change our lives completely. However, the IoT market is still in its infancy. The IoT is transforming business, the way of working in certain sectors and our lifestyle. Combined with other technologies such as 5G, automation and machine learning, its uses and scope are endless.