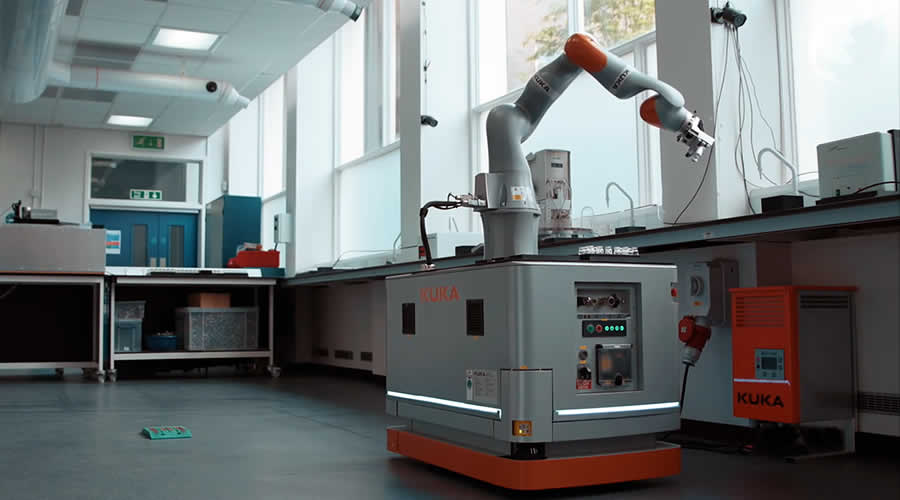 Researchers from the University of Liverpool have developed an intelligent robotic lab assistant that can work practically around the clock and carries out experiments independently just like a human.

The robot is 1.75 m high and weighs around 400 kg. It consists of a mobile platform on which an arm from the Augsburg-based manufacturer Kuka is mounted. A gripper is attached to it, with which the robot can handle fine laboratory equipment.

The robot is capable of working seven days a week, 22 hours a day, and has to go to the charging station two hours for the rest of the day.

The robot can move autonomously in the laboratory. It is based on lidar sensors, such as those used in autonomous cars. It is controlled by software with artificial intelligence (AI). The system enables the robot to carry out all tasks independently in an experiment. Also, it can weigh solids, dose liquids, and then carry out different experiments.

According to the robot’s creators, led by Ph.D. student Benjamin Burger — who built and programmed the robot says it was able to perform experiments 1,000 times faster than a human lab assistant.

Dr. Benjamin Burger said, “The biggest challenge was to make the system robust. To work autonomously over multiple days, making thousands of delicate manipulations, the failure rate for each task needs to be very low. But once this is done, the robot makes far fewer mistakes than a human operator.”

Professor Andrew Cooper, who led the project added: “Our strategy here was to automate the researcher, rather than the instruments. This creates a level of flexibility that will change both the way we work and the problems we can tackle. This is not just another machine in the lab: it’s a new superpowered team member, and it frees up time for the human researchers to think creatively.”

The robot has already proven itself in one project: It helped the team around Burger and Cooper to develop a photocatalyst that uses water to split water and thus generate hydrogen. The robot carried out 688 experiments in eight days. He worked 172 out of the 192 hours.