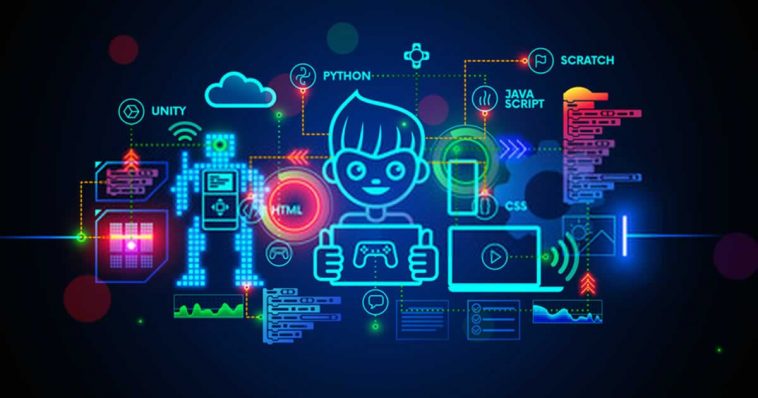 Is there a fun way to learn programming or coding?

Well, for a start, it is important to say that programming is one of the disciplines that involve skills in the area of ​​exact sciences and, because of that, many people already turn up their noses and think they will work with numbers and boring things.

But it’s not true at all. There are many resources like coding games to make learning computer programming fun, regardless of what language, platform, tool or technological resource is used.

The art of learning programming has grown a lot in recent years, whether for professional purposes or as a hobby. Learning to program has many benefits. Besides the obvious, creating your own web pages, apps, games, and even having a career as a developer is also beneficial for the brain. It’s like learning another language. Learning code makes you have better memory and increased concentration.

Maybe you are tired of boring coding books and lectures? So what about learning programming in a fun way, by playing coding games and doing challenging puzzles. In this article, we have made a selection of resources to learn programming languages ​​in an interactive form.

These are some of the best interactive coding websites where you can learn a computer programming language by playing games related to coding and completing various challenges, so you can have fun passing a certain level of the game using code snippets.

CodeCombat is one of the best games for learning coding in a fun way. To learn JavaScript, Python, HTML code etc., even without any coding experience, it is worth signing up to the CodeCombat site. The platform is intended to give students the feeling of power at their fingertips while typing in codes.

It is just a browser game, where you guide a character and pass the levels by programming the movements and behaviours (attack/defence). The learning environment is an RPG with knights, orcs and wizards, where you have to move minions, avoid enemies, launch attacks and destroy bad guys. A really nice way to learn programming languages!

Codewars is not a game but a site of programming challenges where you have to correct pieces of code in Javascript, Ruby and many other in-demand programming languages. This website is intended for developers who already have programming skills but want to improve.

The website is a contest between programmers who can level up by completing increasingly difficult challenges. The challenges are useful and fun, and Codewars is the only site listed that also teaches how to test our own code. There aren’t many instructions on Codewars, so to have fun, you already need to be able to program and use a lot of Google to find solutions to problems.

WarriorJS is another interactive website for learning to code while playing the exciting games of programming and Artificial Intelligence.

The site is very minimal but allows you to play and complete adventures via Javascript code. We can choose the moves of our fictional character and see what this entails so that we can continue forward. Obviously, basics of JavaScript knowledge is required since the interface is not exactly within reach of a novice with programming.

Codecademy is a popular resource for newbies. This is a free and interactive site that allows members to create a profile and learn to program websites and applications with languages ​​such as JavaScript, HTML / CSS, PHP, Python, Ruby.

Codecademy offers lessons and exercises, which are multiple-choice quizzes and games. You can then practice and learn a few new tricks every day to improve as a programmer. The tasks are written in the most understandable language, and if something does not work out, you can use the hint or look for a solution on the forum.

Python Challenge is a coding game in which each level can be solved by a bit of Python programming. Although you will be able to solve most riddles in any programming language, but some of them will require Python. All levels are traversed using simple and very short scripts.

JSdares is an experimental educational open-source programming environment designed for creating and understanding programs. With JSdares, you can create your own JavaScript games. The goal of this website is to show that it is indeed possible to make programming more visualizable, more understandable. Therefore JSdares has been designed with the goal of teaching how to make simple games.

Kojo by Kogics Foundation is an open-source learning environment where you can learn programming in a fun way along with mathematics, electronics, robotics, etc. Kojo is available as a desktop application for Linux, Windows, and Mac and as a web app that runs on any modern internet browser. With the help of the resource, you can also develop analytical thinking and learn how to solve strategic problems.

Do you want to learn to code while having fun from your smartphone or tablet? Then you should try the Mimo app, available for Android and for iOS. The app will help you learn different programming languages ​​with increasing difficulty and track your progress. Every day there are goals to be achieved, and it is possible to immediately receive feedback on the codes created so that you can immediately learn where went wrong.

CheckiO is coding games for beginners and advanced programmers to improve your coding skills by solving engaging challenges and fun tasks using Python and JavaScript. You participate in a world that has been created by the community, where developers who join can develop new levels for others to play.

CodinGame is an online platform for programmers, where the solution of the problem is accompanied by visualization in the style of video games, and the IDE supports 23 programming languages. The website helps you to improve your programming skills while having fun. Also, have fun while learn to code with friends, schoolmates or co-workers on multiplayer programming games and show them who’s the boss.

Grasshopper, developed by Google, is an app for Android, iOS and web that helps to start your coding adventure with fun, quick games on your phone that teach you to write real JavaScript. It is a real online coding game made up of various levels, where you have to analyze a programming code by completing it correctly in a guided way.

Code Hunt a game created by Microsoft Research in which the player must detect code fragments that have disappeared and replace them with their own solution in Java or C#. As players progress through the sectors, they learn about arithmetic operators, conditional instructions, loops, strings, search algorithms, and more. Code Hunt is a great tool to build or improve your algorithm skills.

Schemaverse is a space-based strategy game implemented entirely within a PostgreSQL database. You can compete against other players using SQL commands to command your fleet.

Blockly by Google is a series of educational games that teach programming in a fun way. It is specially designed for kids who have not had prior experience with computer programming. From simple puzzles to understand what a block is, to more complex games using JavaScript. Each game teaches the basics and understanding of loops, expressions, functions, and text-based programming.

Codewars is an interactive collection of tasks for teaching programming. You can write in almost all popular languages. To use Codewars, you need to have at least minimal programming knowledge. Otherwise, you simply won’t be able to register because you also need to write code for this.

Cargo-Bot is a free coding game for the iOS platform. The game helps to learn basic and exercise the way of thinking necessary for anyone who wants to program. It’s a puzzle game where you teach a robot how to move crates.

Scratch programming platform has been gaining in popularity for allowing easy use of programming elements through click and drag. Its main focus is to facilitate learning from pre-defined programming blocks for the creation of small animations and can be used to produce games with keyboard interactivity, animation of images and sounds. The game was developed at MIT.

Kodu, another platform aimed at children, is a coding game for Xbox that allows the creation of simple games from a visual programming language that can be used with the Xbox controller. The core of the Kodu project is the programming user interface. The language is simple and entirely icon-based. The game is more intended for schoolchildren of junior and middle grades, but it may be interesting for beginners in programming as well.

JSRobot is a game where we have to make the robot move using the Script screen. You can program using simple JavaScript codes to make the robot move forward or to make it perform other actions until the end of the level is reached. Each level becomes more and more difficult, and programming will become more and more engaging, helping to learn to code many young kids approaching Javascript programming for the first time in a fun way.

Flexbox Froggy is a coding game where you will help Froggy and his friends by writing CSS code. It is perhaps one of the most agile ways to lay out our content in boxes, however, you have to practice to understand how it works.

Learn to code while having fun is possible with these interactive courses, coding games and challenges. I hope the article was helpful. Perhaps we missed something, and the most worthy resources were not included in this collection. Suggest your ideas in the comments.